Ever since the opening of the museum on February 22, 2022, it has been a hot topic for discussion among both domestic and international tourists. You might also want to join them in exploring the museum. You will need a Dubai visa for it if you do not belong to a country that has the eligibility of visa on arrival. If you are currently residing in a country that does not have a visa on arrival, consider filing an application for a Dubai visa for this purpose. Read on to know more about the noteworthy features of the museum.

What is special about the Museum of the Future?

The Museum of the Future grabs everyone’s attention because it is a one-of-a-type museum that showcases the future. On the surface, it looks like a marvel of imagination. But in reality, it acts as an incubator for researchers and scientists. This apart, it also aims to influence the minds of thinkers. From the standpoint of future innovation, it sets up the expectations of what the future may look like.

Given below are the aspects that make the stunning museum unique for visitors. 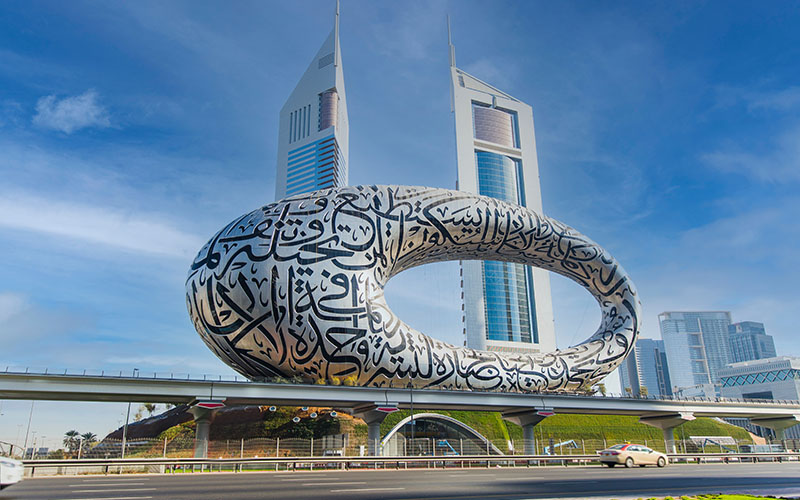 While February 22 was the museum of the Future Dubai opening date in 2022, it has already made the headlines. The museum is a marvel that covers an area of 30,000 sq m. Now that it has been thrown open to the public, it is getting positive reviews from both tourists and scientific thinkers. From an architectural standpoint, it has a unique structure. It is a seven-storey building without any pillars, which is slightly unusual. Generally, buildings, especially those that are built on modern architecture, have pillars.

Another noteworthy feature of the unique architecture of the Museum of the Future is that it does not have any sharp corners externally. This feature makes the museum look different from other popular buildings. Its height is 77 meters, and it is replete with a wide range of inspirational quotes. They have Arabic calligraphy.

Feature-wise, the museum stands apart from the rest with some unique characteristics. Special care has been taken to give it a solid structure even though it does not comply with the conventional rules of the construction of buildings. Additionally, it illustrates how far Dubai has come in the field of architectural engineering. Before visiting Museum of the Future, take a tour of Dubai Museum and Al Fahidi Fort as a comparison. Dubai’s advancement over the past two decades will surely take your breath away! 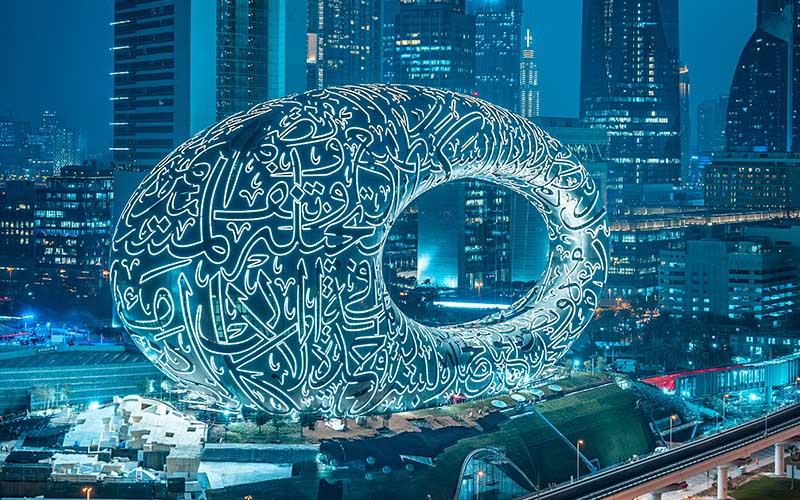 The Museum of the Future emphasizes the use of renewable sources of energy. It consumes about 4,000 megawatts of power which are generated through solar plants. This feature of the museum makes a positive contribution to environmental conservation. In a world where temperature rises daily due to global warming, switching to clean and renewable sources of energy, such as solar energy, can help minimize the level of carbon dioxide.

Besides, the use of solar panels for generating electricity also sends out a powerful message to those who wonder what the world will look like in the next fifty years down the line. It indicates that renewable sources of energy would replace the non-renewable ones in the future, which would go a long way toward keeping the earth a habitable planet.

Gateway to the future

The Museum of the Future in Dubai is a fusion of a wide range of the latest technologies. Included on the list of such technologies are Artificial Intelligence (AI), Big Data analysis, Augmented Reality (AR), and Virtual Reality (VR). These are the defining technologies for the future. At present, they have made a lot of progress. However, experts believe that the best phase for these technologies is yet to come.

Though machines dominate the operational aspect across different fields, the smooth interaction between humans and machines is necessary for the proper execution of tasks. In this regard, the Museum of the Future is a revelation as it gives a sizeable space to not only showcase the human-machine interaction but also how it would influence operations across different industries in the future.

The reason why many experts believe that the Gateway of the Future will hold the key to the changes of the next level that can be expected in the future is that it covers all bases. It includes all important genres. Prominent among them are smart cities, energy, transportation, education, and health. In addition to these aspects, it also includes future innovations through new testing ideas in laboratories for meeting critical challenges.

The museum offers ample scope for those who are interested in space science. It emphasizes space travel, which is likely to see a surge in the future. Its scope also includes genetics and DNA sampling – two vital aspects that can influence the life of humans and animals in the future.

Whether you are based in Dubai or outside the United Arab Emirates (UAE), the Museum of the Future in Dubai is a must-visit place for you. It has everything, ranging from technology to innovation and space travel. Together, these aspects add up to make a visual presentation of things, as they are likely to appear in the future. If you are a foreign national, you can either use the option of a visa on arrival or apply for a Dubai Tourist Visa, when you visit Dubai to explore the Museum of the Future.